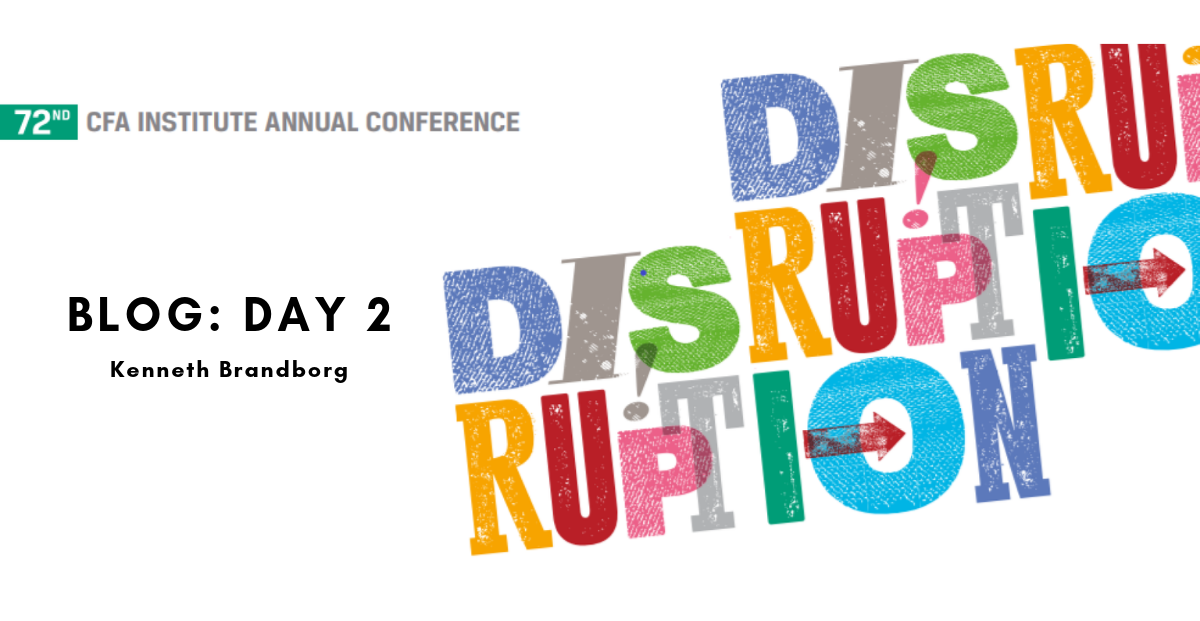 Day 2 of the CFA Annual Conference is a marathon. It kicks off at 8 and runs no stop until 22.30 in the evening, where the legendary CFA reception closes. The day offered great speaks, and what apparently was a finance super star.

CFA has framed this year’s conference around disruption. This was also the main theme of this day’s sessions. It started by the standard introduction, where the case of demographic changes was framed as disruptive. But can you even do that? There are few things as predictive as demographics. You get exactly one year wiser each year. That has not much to do with disruption. Or – it might have. In the introduction given by Gary Baker, he frames disruption as a constant! I don’t think you can be more off. It can be a constant force, a constant opportunity or threat – but not just constant. But it had me thinking, maybe disruption are simply a consequence of obvious changes and a lot of ignorance from existing stale systems. Today, we did see examples of this at least.

I Can Say Anything – and be right

All we heard from Peter Zeihan yesterday was interesting, but according to Mark Yusko it was all wrong. He did not say that, but he told an almost exactly opposite story about development in the markets – Peter meant rates of return will quadruple, Mark meant they will be negative for the coming 10 years. It is liberating that you can mean anything, draw a graph underpinning it, and become a renowned portfolio strategist or manager. At some point you will properly be right,and can claim to be a genius.

Apart from this, Mark gave a great although pessimistic presentation. One thing that is important to note, is that Americans no longer makes fun of Trump. They think that a lot of his politics makes great sense – they could wish for a more elegant wrapping, but they think the content is solid. This was indeed surprising for me.

Again, there was a mix up of politics and technology. Mark claimed that from 2024 block chain will be the single most important value driver in our lifetime. A very bold statement and I will keep an eye on the developments to see if he is right.

Next up was Anne Richards. She started up by highlighting a curious observation. The society we have today, with low rates, low unemployment and high standards of living. That was what politicians dreamt about in the 1970’s. Now we are here, and we are not happy. Maybe because we have forgotten to find a new project and a new and better goal to strive for.

Another interesting point made by Anne, is that disruption has always been with us. The best example is what the potato did for world population, when it was introduced. It was insane. What is new is the pace of disruption. Like almost everything else the pace has risen.

A theme that many has touched upon is the failure of capitalism. It seems that even amongst finance professionals there is an understanding that the large differences in who earns profits will fuel instability. Also, there is an understanding that we need to start focusing on what markets needs to optimize. There has been a sole focus on profits, but that has stopped working. A bit gloomy and troublesome thinking followed that session.

Luckily Anne also gave a fling of hope: It’s easy to change. Just engage. It is not only large pension funds and asset managers that need to engage. We can do it as well – on a smaller scale – unfortunately there is a price. If we achieve stability, we must settle for ‘sustainable returns’ that keeps profits better distributed.

A Superhero Came by

When someone can stand at a stage and say ‘I haven’t gone to Davos for a decade..’ you know, that he is someone. This someone was Mohamed A. El-Erian. Former CEO of Pimco. He had this aura of ‘I know stuff, and you know I do’ around him. It gave the presentation a tremendous weight. He came with some interesting points. Firstly; There is a rising risk of the unthinkable – whatever that is then. And secondly – if in doubt – Italy is the only PIIGS countries left. Which can be quite a challenge for EU.

Oh – if you wondered, he wasn’t that optimistic either. Or maybe he just wasn’t until we arrived at the evening reception. Here there was a line for having taking selfies with him. The line was so long that I think he still stands there taking selfies with fans. It was almost as being at a rock concert – except for the lack of screaming teenagers.

All in all, the day was really good. There is a consensus that this year’s conference has been better than the previous years. Not because the big stars are bigger this year, but the smaller concurrent sessions are far better than earlier – or we have just been better at choosing the good ones.

A half day remains tomorrow, before the conference comes to an end. I will of course let you in on my thoughts about that day also. 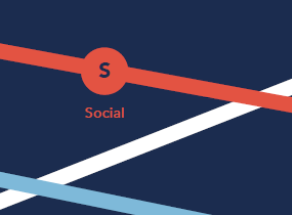 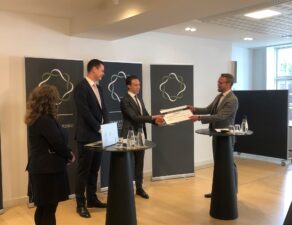